Energy is the ability to do work or cause change. In the context of physics, it is the ability to cause an object to move or stop its motion. It exists in several forms: kinetic, potential, thermal (heat), electrical, or nuclear.

The unit for energy is joules (J) or kg⋅m2⋅s-2 (SI Base Unit). However, only 3 types of energy will be focused on: kinetic energy, potential energy, and the work of friction.

Kinetic energy is the energy that an object possesses due to its motion. It is defined as the work needed to accelerate a body of a given mass from rest to its stated velocity. The equation of kinetic energy is:

KE is measured in joules (j)

Potential energy is the energy an object has as a result of its position, or the stored energy of position. There are two types of potential energy. 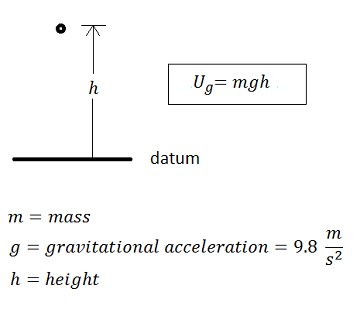 2. Elastic/spring energy: the energy stored in elastic materials from compressing or stretching elastic material, such as springs, rubber bands, trampolines, etc. The more the object is stretched, the more energy is stored.

Just like gravitational potential energy, spring energy is measured relative to a datum (a starting position), which must be determined first. The equation for spring energy is:

k = spring constant (value depends on property of spring; the value will be given to you) 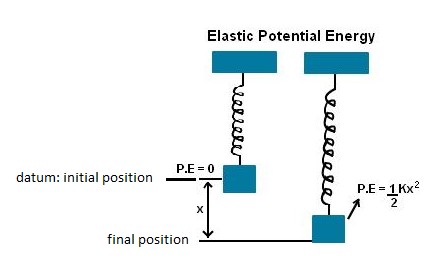 μ = friction constant (depends on property of surface; value will usually be given to you).
Fnormal = normal force.

Work is the energy transfer that happens when an object is moved over a distance by an external force in the direction of the displacement.

The equation for work is:

So, the work of friction is:

As mentioned before, since work of friction takes away from the overall energy in the system, the value is negative.

1. Classify the energy as either kinetic energy, potential energy, or work due to friction.
2. Determine the energy equation to use.

Substitute variables in the equation given in the problem.

1. Classify the following as a type of potential energy or kinetic energy (use the letters K or P)

2. You serve a volleyball with a mass of 2.1 kg. The ball leaves your hand with a speed of 30 m/s. What is the total energy in the system?

1. Classify the energy type: kinetic
2. Determine the equation to use: ½ * m * v2
3. Substitute variables in the equation given in the problem.

3. A baby carriage is sitting at the top of a hill that is 21 m high. The carriage with the baby has a mass of 1.5kg. What is the total energy of the system? 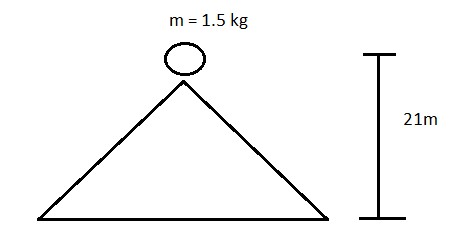 1. Classify the energy type: potential
2. Determine the equation to use: m * g * Δh

Substitute variables in the equation given in the problem.