Projectile motion is when an object is thrown in the air at an angle. Think of a football player throwing a football, a soccer player kicking a soccer ball, or a golfer hitting a golf ball in the air. 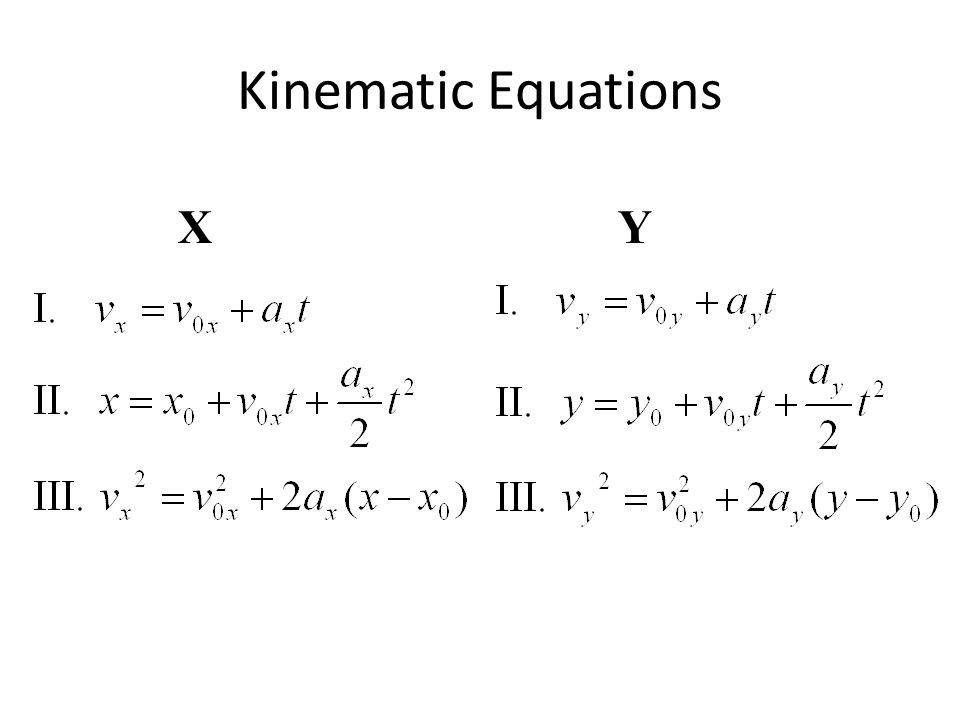 Below are guidelines to keep in mind when solving projectile motion problems.

The projectile has an initial velocity. Since it is thrown at an angle, the velocity must be broken up into components. See diagram below:

In cases where the projectile is thrown across a level ground (not thrown from a cliff or thrown to a higher ground), the situation can be split in half. That means at the half-way point, the time is also half of the full time (t1/2). Also, at the midpoint, velocity in the Y direction = 0 (see explanation below).

Since Vi, x is constant, acceleration in the X direction is Zero (ax= 0)

The range is the horizontal distance the projectile travels from the initial position to the final position.

Acceleration in the Y direction is

. It is negative because acceleration acts downward.

Velocity in the Y direction at the halfway point, or midpoint (Vy, mid) is zero. This is because when the ball reaches its highest point, it stops momentarily before reaching the ground. Thus, there is no velocity.

The max height is the maximum vertical displacement that the projectile reaches before falling back into the ground.

Because the acceleration in the X direction is zero and

, the kinematic equations in the X and Y direction can be simplified: 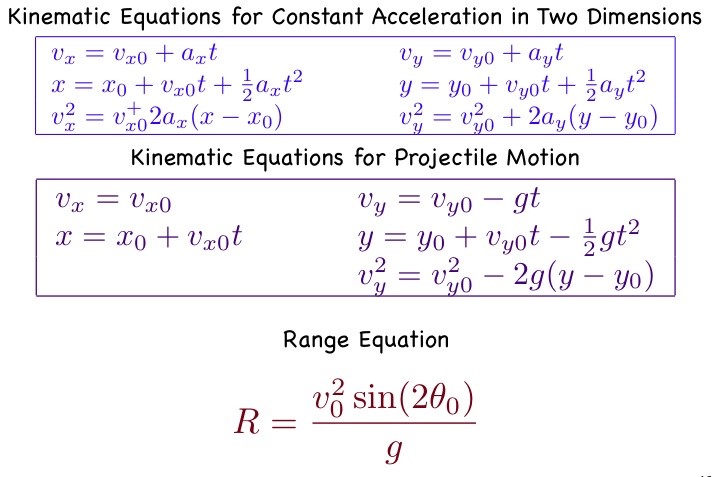 a. There are some cases where you cannot solve for certain variables with one direction alone. Once you used all the equations for one direction, use the equations in the other direction.
b. For the Y direction, it is recommended to split the projectile motion in half (when it applies – see General Notes above).

1. An object is launched at a velocity of 20 m/s in a direction making an angle of 25° upward with the horizontal.

2. A cannonball is launched horizontally from the top of a 78.4-meter high cliff at 10m/s. How much time will it take for the ball to reach the ground and at what height will the ball be after each second of travel?

1. Write down given information and make assumptions.

2. Break up velocity into X and Y components.

3. Start with one direction – X direction.

Time still needs to be solved for. Since all the equations in the X direction have been used, transition to the Y direction.

For solving for the Y direction, it is recommended to split the projectile motion in half:

Going back to the X direction,

Finding the maximum height, we will use the second equation in the Y direction:

Once again, it is recommended to break the projectile motion in half because that is where the maximum height is.

Replacing yf with Ymid, and t with t1/2,

Substitute the values into the equation:

1. Write down given information and make assumptions.

Assumptions:
Starting position in X direction (Xi) = 0 m
The projectile is thrown from beginning of cliff, which will be considered 78.4 m above the origin.

Total time
Height at each second of the launch

Break up velocity into X and Y components

Start with one direction – X direction

Time still needs to be solved for. Since all the equations in the X direction have been used, transition to the Y direction.

In this case, we cannot split the motion in half; the ball is not thrown across level ground.

Use the second kinematic equation in the Y direction to solve for time, since all but one variable (time) have been determined and can be plugged into the equation.

Substitute the variables into the equation:

Solving for t by taking the square root of both sides,

Now the height at each second must be determined. Using the same equation from above,

Since the other variables have already been determined (see previous steps), substitute different values for t (i.e. 1, 1.5, 2, 2.5) and solve for yf for each of the time.