Radians and Degrees (How To Convert Between Them)

These two terms ‘radians’ and ‘degrees’ are two types of units to measure angles. There are many units such as gradians etc., but degrees and radians are the only terms which are taught in school and colleges.

What is the Degree?

The term ‘degrees’ is useful for expressing both directions and the size of the angle. Suppose you are facing the north direction, then you are on zero degrees, which can be written as 0°. That small circle which is attached to the raising 0 is known as the symbol of degree. If you turn around fully and again face the north direction, then you took a 360° turn, which means 360-degree turn. The whole revolution in one round, the circle, is 360 degree or 360°.

Why does one revolution, or one round, get divided into 360 parts, known as ‘degrees’? Due to the ancient system, around five thousand years ago, the numbers 6, 12 and 60 were known for particular religious significance. It is due to them that we have twelve-hour nights and twelve-hour days, with every hour of sixty minutes and each minute is divided into sixty seconds.

The main issue is that one round, or once revolved, is divided into 6 * 60, which is equal to 360 parts, known as ‘degrees’. Most students think of a circle, in the degree of 360° and calculate the semi-circle as 180 degrees or 180°. Thus, here we have a clear concept of circle degrees. 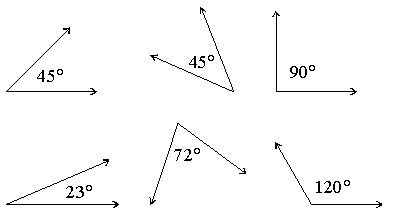 The term ‘radian’ is the different way to talk about the circle, which is the just the unit of measure, in a different way.

Think about the word ‘radian’ which sounds like the radius. It turns out that a radian has a close relationship with the radius of the circle.

The ‘radian’ is the measure of an angle, which is measured when drawn as the center angle of the circle which intercepts an arc whose length is the same as the length of the radius of the circle.

How to convert Degree to Radians?

The general formula for turning the degree to radian is just by multiplying the number of degrees by π/180°.

The general formula for turning radian into degrees is to multiply the reciprocal of π/180, which means 180/π.

Just multiply the value of radian into degrees.

Thus, now you are clear with the concept of degrees and radian with their conversions of each degree and radian. 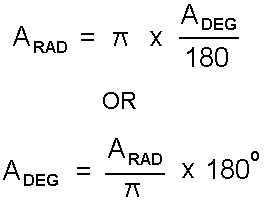